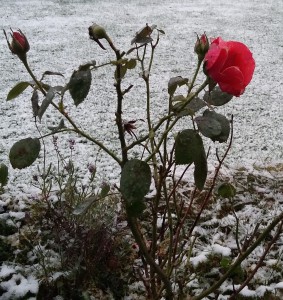 Laura looked out of the window, it had begun to snow. A fine white blanket of snow soon covered the garden. She glanced at a small rose bush, it still bore flowers right here in the world which was turning white. It was afternoon. She needed some fresh air, and put on her coat, and went into the garden. She paused by the pine and looked at the rose in the snow. She turned her head and discovered some small imprints crossing the lawn, they were the size of a hedgehog’s footprints. She frowned, under normal circumstances, a hedgehog would curl up to a small spiky lump and hibernate now. Perhaps it was not a hedgehog at all? With curiosity, she began following the tracks, wondering where they might lead her? They began by the bushes and led her right across the garden and over to the hedge. She pushed away some branches, and through a hole in the hedge, she got out onto the pavement, which she continued along for a while. The imprints in the snow were clear, fine and small. Laura sensed a strong determination in them, they continued down the slope towards the sea. Now she was down by the still, dark water. The tracks went on along the path to the left, past the massive, dead ship yard without sound or smell. Right in front of the fisherman’s hut, the tracks ended. She paused at some distance from the hut. The door was ajar. Could the animal have gone inside?