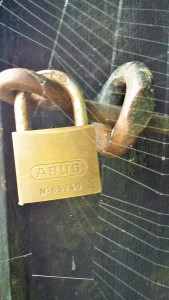 I had some time on my hand for I did not have to be in school until later, that is why I decided to walk with my bike along the water. The usual route, down the road  to the left, out on the patch of asphalt. Past the first ship yard. I soon reached the small fisherman’s hut, where I parked my bike. The house was black and made out of wood. A boat turned upside down was used for the roof. The windows were painted white. I wondered if there was something special inside the house which was always locked up with a rather big padlock on the door. I got my SLR camera out of the bag, and sat down on the bench beside the house. There were always new things to be discovered through the camera. I removed the cap from the lens and turned it on, then I caught a boat bridge and the sea. I turned around with the camera. Looked around. I zoomed in on the padlock, where a big spider had created its cobweb. I shot a few pictures, and put the camera away again. Two wild geese flew past me above my head. The sun broke through the clouds, and silver stars flickered on the waves, waves of restlessness poured over me with a great force. What is my true goal? I wondered, and picked a rose-hip, squeezed it open making  its seeds appear. I looked at the fisherman’s hut. I threw away the rose-hip and got up. I looked in through the round window in the door. The window was matt from dust and there were cobwebs on it as on the other two windows. The cobweb stuck to my fringe, it caught my forehead and nose. I stroked my face in one swift movement and removed the web. I could not see much through the small window, it was dark inside. I went to the window on the right, through this I could make out a picture of different knots, a bunch of fishing nets, a rope, a green thermal jacket, and some fenders. I took one step back. Something moved inside behind the window. Was there someone inside?